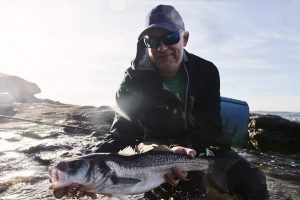 My passion for Fly tying actually started long before I had ever picked up a fly rod. I was well into my second year of fly tying before I even thought of showing up on the water with a “fairy wand” as my friends called it, but they were keen for a try to and not long later they were all converted to fly to. I started my fly career tying and fishing for brown and rainbow trout and smallmouth bass in the natal midlands at the base of the Drakensberg mountains in South Africa. When I hit my teen years my father raised us all and moved us down to the Wild coast in the Eastern Cape and a passion for all things saltwater fly tying and fly fishing was born . Being Based in Port St Johns we had some the most epic fishing off the rocks beaches and the numerous mangrove filled estuaries. Few years later after high school I bummed around fishing around SA and ended up working a Lodge starting in Zambia as a guide for tiger fish , I’m using the term guide lightly as i spent more time fixing boats and building decks but I got to spend a lot of time on the water doing what I liked in my own time throwing loops for Tigerfish . Before the lodge could fully open and I could properly pursue my dream job of guiding I moved to the UK, silver lining to it , as a favor I was asked to do up a batch of GT flies for a friend that worked in a well know London Fly shop, then I was asked to do a few more. From that favor I have now tied thousands of saltwater and predator flies for destinations and species I will probably never make it to, but it enables me to keep innovating and keeps feeding the passion for tying flies.