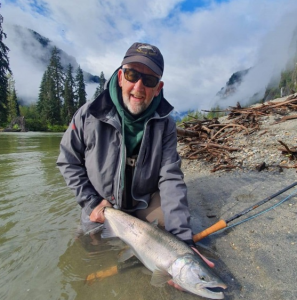 Ned is a native of Arderra, Mooncoin who spent most of his youth hunting and fishing in local small rivers  and lakes for brown trout and pike. Ned began fly fishing in his mid teens and has not stopped since (not that he wants to!).

Having spent over 20 years in dairy and potato farming, he decided it was time for change, and wanted to try something different.  The idea for a trout fishery was on his mind for some time but when you are milking cows every acre is for grass and not for crazy projects like building a lake for trout fishing.

After lots of research (days off fishing) the idea for his new venture was developed and so began Ardaire Springs Angling Centre.  The Centre opened its gates for the first time in March 2011.  At first it was just a fishing venue but the facility soon developed into having an onsite tackle shop which is now a large part of the business.

Ardaire Springs is well known throughout the country for its large stock of double figure fish with hard fighting rainbow and brown trout ranging from 2lbs to 20lbs  testament to this is the large number of customers we get traveling from all over ther country to do battle with these fish .

Ned also host trips to British Columbia every year to fish for pacific salmon and steelhead.

I have been preparing for a number of years to host an Angling Show. I firmly believe that Ardaire Springs is the perfect venue, it offers an abundance of space and opportunity for demonstrations and competitions. I would also like to extend a large thank you to a loyal group of friends who have worked tirelessly with me in ensuring the Show will be a major success.

This message is only visible to admins.
Problem displaying Facebook posts. Backup cache in use.
Click to show error
Error: Error validating access token: The session has been invalidated because the user changed their password or Facebook has changed the session for security reasons. Type: OAuthException

just looking back on the irish spring angling fair video many thanks to george mcgrath who took the time to put this together we are already working on next years show ,looking forward to seeing you all there . ... See MoreSee Less

Join me at the inaugural Irish Spring Angling Fair where a great weekend was had by all...Support the Channel at.....https://www.patreon.com/GundogandFly

So we have just completed the draw for the selections of flies kindly donated by all the fly Tiers and stands at this year's show.Huge thanks to all who supported the draw and show, all proceeds will be donated to Pieta House.Winners in order were Lily Driver Pat Quigley Jim pullingerJohn O Brien Angela WalshJohn Grace Losso Losty Mark Rogan All winner will be contacted and get to chose there prize.Once again thanks to all who supported the show and draw....looking forward to ISAF 2023 29th & 30th April 2023 ... See MoreSee Less

Be in with a chance to win this and other fabulous fly selections...5 euros per line you can purchase them at Ardaire Springs or through PayPal contact us today and don't miss on on some amazing prizes...all proceeds going to Pieta House ... See MoreSee Less

When this happens, it's usually because the owner only shared it with a small group of people, changed who can see it or it's been deleted.
View on Facebook
· Share