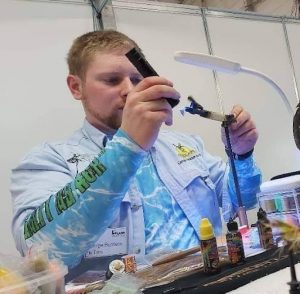 Hi everyone!! I’m George Burdess and I’m 24 years old. I have been fly tying for 16 years and fly fishing for 17 years. I am mostly a self-taught fly dresser and began when my uncle introduced me into fly fishing and fly tying.

I began reading up a lot about fly tying and when the Irish fly fair started, I began attending the show each year to which my fly tying blossomed. Stevie Munn gave me the opportunity to give tying demos at the 2015 show which I attended. This was the start of my deeper passion for fly tying.

Since then, I have given fly tying demo at shows all over Ireland even tying at the British fly fair & International show 2018! I became a Pro Team member with Deer Creek in 2018 which has been a fantastic opportunity for me since I joined. I’m also a columnist for The Countryman’s Weekly having my own segment called fly of the month, I made my debut in the Fly Fishing & Fly-Tying Magazine Oct 2018 addition with my Iron Bru pattern.

My area of fly-tying ranges from Irish Lough patterns, traditional wets, river patterns and more recently pike flies and saltwater flies. I’ve fished for many species on the fly, travelling all over Ireland and even to Massachusetts for largemouth bass and striper bass. I chase the illusive bar of silver and the cheeky brown trout as well as the ferocious pike. If it has a fin, there’s a chance I’ll be after it on the fly rod!!  I hope you enjoy my work and look forward to seeing you at the show.